Our office provides information, advice and representation to low income workers having problems with their employers or who have been wrongfully terminated.

We can help you with:

Please click on the below links for more information: 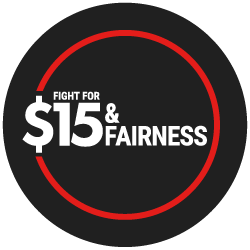 Fight for $15 and Fairness

The $15 and Fairness campaign is fighting to raise the minimum wage to a living wage and to improve the rights of workers.

In May, the campaign celebrated a great success when the Ontario government agreed to increase minimum wages. But the fight is not over. Click the sticker to see what you can do to help!

Recent changes to the Employment Standards Act (ESA) mean workers are entitled to fewer days off and no paid sick days.

This month’s On the Radar talks about these changes, which took effect in January. The ESA applies to most employees in Ontario.

Before January 1, the ESA gave workers the right to be paid for 2 personal emergency leave days each year, after working for their employer for one week.

And employers could not require workers to get a medical note to prove they needed the leave.

As of January 1, 2019, the ESA includes the following short leaves of absence for each calendar year:

A worker who has worked at least 2 weeks in a row for their employer may qualify for these leaves.

No right to be paid in the ESA

The ESA now says that employers don’t have to pay workers who take time off for one of these leaves.

But workers might have the right to be paid if they’re in a union or if they have a workplace policy or employment contract that gives them this right.

Workers can take up to 3 days of sick leave if they:

Workers can take up to 3 days of family responsibility leave because a family member:

Workers can take up to 2 days of bereavement leave because a family member has died.

Proving why a worker needs a leave

An employer can ask a worker to prove why they need a leave of absence.

But employers can only require proof that’s “reasonable in the circumstances”. This may include a medical note from a doctor or other health professional.

If a worker needs more time off

A worker might have the right to a longer leave of absence.

When an employer does not follow the ESA, a worker may be able to complain to the Ministry of Labour. This is called making a claim.

For example, a worker may be able to make a claim if their employer:

Steps to Justice has information about:

Policy statement on cannabis and the Human Rights Code (July 2018)